In the upcoming posts, I will be sharing a multitude of same concept, different spin ideas that I have done for friends with ZERO birthdays.

Recently I have a Blog Buddy that celebrated one such milestone!!! I have never met this gal, but she has a passion of coffee (a kindred spirit indeed)...take a bow Leonie Schroder. Now I had to take a bit of a stab-in-the-dark with a colour scheme, because trawling through Leonie's blog did not really give up any real clues!!!

The idea I had in mind was this FAB and super cute Bird House post it holder by Cynthia Richards. I downloaded the tute and started to work. Essentially it is easy peasy to put together, the only real modification I made was at the base with adding a Round Tab Punch to help it sit up a little better. I also added a wee slip for the pen to go to through at the base. Given the gift was based around an easel format, I made a matching card too. Here are the two together....... 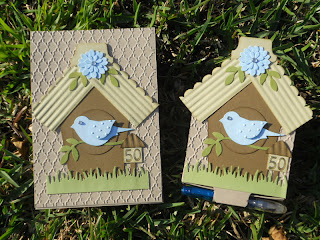 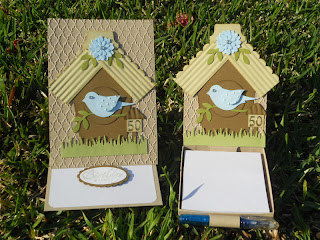 The bird houses are made identically for both the card and holder. I sponged ALL edges which made a big difference actually!!! There is fine detail all over with texture in the bird wing, the roof and even the letterbox lid!! Here is the card and the post it holder detail close up...... 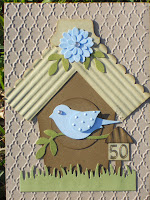 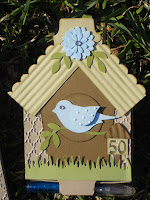 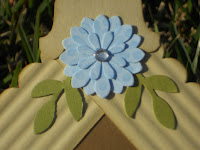 The bird sits pretty on a branch from the XL bird punch and the post box was done with the 1 1/4 inch square punch, double punched just to nip a corner....if that makes sense. The post is a word window punch cut lengthwise and trimmed. on the second pic you can see how the addition of the round tab punch helps the whole thing sit. 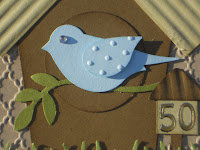 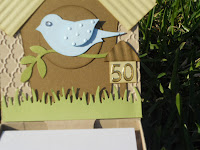 These are so cute and clever. You definately have a go at everything don't you! I wish I had the time to blurf more and get wonderful ideas like this.... but luckily you post yours up so I can case from you!!!

Cynthia did leave a comment, but it was eaten somewhere in cyberspace!!?? Via e mail she wrote....
"Thanks for sharing your finished project with me. I love it!"