Hey and HELLO!!!!!!!! It's so nice to be back blogging and can I say a MASSIVE thank you to all my blog friends that e mailed me their support and sympathies to the plight that befeld our wireless connection. We are now a lot wiser and are keeping a record of our usage to support our claims....that to date have fallen on deaf ears.

A couple of posts back I showed a pink version of a card I saw on SCS here. I went on a play date to my bestie's house a couple of weekends back and decided to do another version...one in blue. Here it is.. 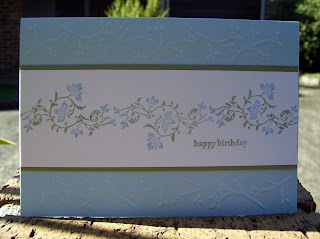 Again, I used a Cuttlebug border to lift the card slightly and I love this effect. It's as if the two were meant for eachother!! I am so very sad to see Mellow Moss retiring (boo!!!) but have stocked up well and truly.
Thanks for dropping by and I am in the midst of putting together some regular posts over the next week or so to show you what I have been up to.
Thanks for all your well wishes and for stopping by.
Stuff used:
CS: (SU) Bashful Blue, Mellow Moss, Whisper White
Ink: (SU) Stamp and Write Bashful Blue and Mellow Moss Markers
Stamps: (SU) Vintage Vogue, Teeny Tiny Sentiments
Other: Cuttlebug "Just My Type" Embossing Borders
Lynda xx
Posted by Lynda at 9:00 AM 4 comments:

Sorry I have not posted recently. DH (and resident computer genius) is of the opinion that someone has hacked our account and is nastily downloading a whole heap of stuff at our expense (despite our protests to our supplier)and racking up our limit very quickly. Hence, as a result I have not been able to do much.

I have so much to show you...as my mojo has somewhat returned. To the blogs that I visit...I am sorry but I will not be ther til the end of this week!!!

Thank you for your patience and I hope to be posting again real soon!!

The brilliant and incredibly talented Debbie P posted this some time ago. I commented the following:
"Such a fun filled card Deb...LOVE it and so does Miss 5!!! Don't envy you cutting round those swirls tho..LOL!! One day I hope the prince turns up before Pumpkin soup is reached!! The fairy Godmother is too cure as well. Brilliant!! ooxx"

Well blow me down if Debbie didn't do something so very speccy to make a little gal's day. About a week or so after, the very same stunning creation appeared in our letterbox addressed to our daughter. 1...she was stoked to get mail addressed to her....and 2......the deafening squeals of delight when she opened it up to discover it was the same card she has seen on "Mummy's Computer". Inside also was a wonderful note explaining that she thought it should be in a little girl's room.

Here is what turned up in out mail box that made my daughter so very happy.... 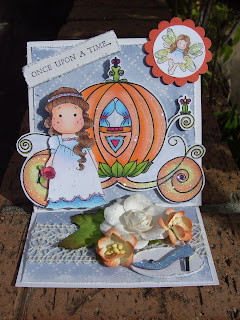 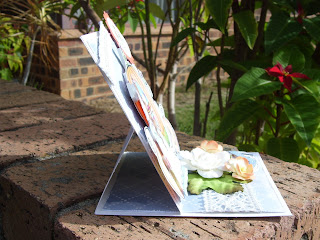 From a crafter's perspective, I am in total AWE of Debbie's fantastic colouring and attention to detail. Of course, you can click on the above link to see how she does all these incredible elements, but here are just a couple of close ups to tease you a bit.

The Fairy Godmother and the devine glass slipper (complete with bling)..

And of course the beautiful Cinderella and her magnigicent carriage....

I cannot thank Debbie enough for sharing her stunning card with my daughter. It has taken pride of place in her bedroom and when the morning sun hits it, all the sparkles twinkle in her room. She has made Miss 6 very happy indeed.

Going Round In Circles (aka Light Bulbs and Brick Walls)

Again, this is NOT a reflection of my disposition...although SOME may argue the point!!

The title refers to my most recent effort for one of our young neighbours who turned 7. He is the most beautiful little boy who has a developmental disability. He gives you so much every time you see him. He loves everything bold and bright as well as being heavily into anything to do with animals.

Once again....I strapped on my thinking cap. I knew that I wanted to use my very neglected Wild About You set (which covered the animal quota), but the bold and bright.....I hit a brick wall.

So.....I went blurfing for inspiration and came across something that the delightful Christie Wallace said. Although the whole of the quote pertained to SU product, the part that stuck with me was "Sometimes when you lack a bit of inspiration you only need to look at the papers and colour combinations"........So I did. I rummaged through my ever increasing stash of papers and found a bright bold circular pattern and then the light bulbs started to go off....so thank you Christie!!

So now I had my paper, my stamp set and I managed to match most of the colours with inks that I had. All was going sweetly. The idea of concentric bright circles and the animals in the middle then.........BRICK WALL!!!! After having thought I had nearly every size of circle punch from 1/16"-2"...the only one I did NOT posses was a 1 3/4" circle...AAAARRRRGGGGHHHHHH!!!!!!!

So...another light bulb...my dear father gave me a primitive (but as it turned out exceptionally useful) circle cutter for my birthday last year that I had not used. It's like the old geometry compasses but it has a blade where the pencil would usually would have been. So then I measured out a 1/2 of a 1 3/4" circle and HUZZAH!! Blade did not quite go through the CS, but it was enough that I could cut it out. 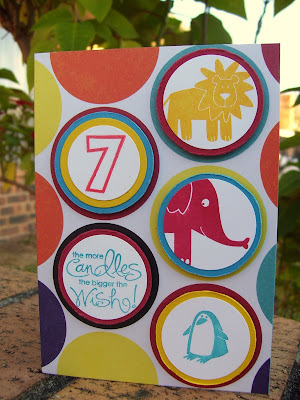 As I did not do the best job of cutting out the large circles, I decided to distress them with the cutter kit. The "7" is from a Gel-a-tins set that I got sometime ago too, but just had not gotten out. I popped up all the circles on dimensionals...which you can (sort of) see here.

The best part of course was that Jayme LOVED his card and the fantastic smile I got was worth all the ups and downs of putting the card together.

Thanks so much for sticking to the end of this arduous tale.

Well....I finally got good enough photographic conditions to snap the partner to the card in the last post. This is the portrait partner to the landscape one.

I am so very thankful for markers that allow me to do clever things with sentiments. The 'Happy Birthday" on this card is actually on one line (I hope tha makes sense)? I used my marker to colour half of it....stamp it and then repeat the process for the other bit. Worked perfectly huh??

A gal can never have too many b'day cards in her stash....right?? This again is a really quick and easy card....once your mojo of course is moving in the right direction!! Thanks for stopping by.
Stuff used:
CS: (SU) Pretty in Pink, Mellow Moss, Whisper White.
Ink: (SU) Stamp and Write Markers in Mellow Moss and Pretty in Pink.
Stamps: (SU) Vintage Vogue, Amy R "Birthday Sentiments"
Punches: (SU) Large Oval and Scallop Oval Punch.
Lynda xx
Posted by Lynda at 2:14 PM 4 comments:

Respite from a flagging Mojo


I don't know whether it has been the weather in Sydney (copious amounts of rain and heavy at times) of the fact that I produced soooooooo much at the Crafter's retreat.................but my creative MOJO has been MIA for about 2 weeks or so. I have not had the want or desire to pick up a stamp, design a card or ANYTHING. It is the weirdest feeling. I have had cards in varying stages of completion but just have not had the impetus to finish them.

I saw this cards on SCS some time back (and followed the trial to the creator) when I first got my Vintage Vogue set. It was very stark, but it sewed the seeds of an idea. I also, in my quest to boost my stash, I have one to go in portrait and this is the 1st....in landscape. Also...I used PINK!! 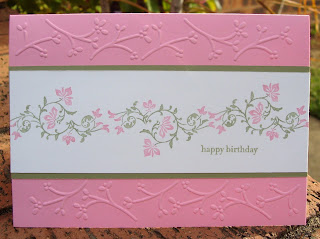 I used my "Teeny Tiny Sentiments" for the first time. but something was still missing. The you have one of those lightbulb moments. I recalled a Cuttlebug border that may work to fill the stark bits....and guess what...IT DID!!!
Here are closeups of the sentiment and the Cuttlebug embossing. 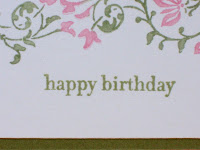 I was so happy with the finished product. I can only hope that this kickstarts my mojo in the guts and I can move forward. I will hopefully post the partner to this card in the next couple of days, weather permitting.


I recently received some very sad news about one of my old patients of whom I looked after for some 8 years. he has been diagnosed with a very nasty Cancer and his prognosis is not favourable. When I left my old job, he made me a beautiful clock and barometer hanging piece from scratch. It (like him) has not missed a beat.

I saw this card on SCS and thought I could tweak it a little to suit this chap's personality and flair for woodwork. I came up with this... 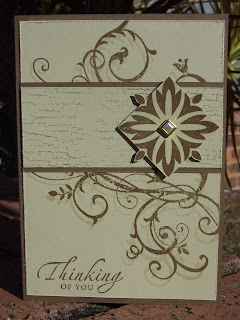 And here are the close ups of the motif and sentiment. 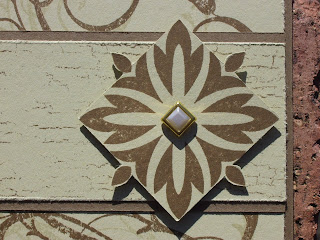 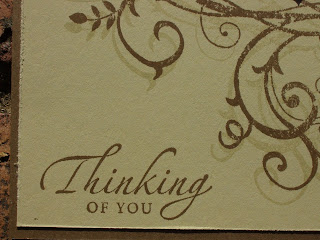 I was a little unsure about using the square pearl/gold brad in the centr of this, but I am happy I used it anyhow. I love the 'shadowing' of the River Rocka nd the Soft Suede. It is a very rare card that does not have any Whisper White of Very Vanilla in it. the final step to 'bloke' this up was to distress the edges of the River Rock CS just a little.

Also sorry about the sun glare in some of the pics. I have been playing 'chicken' with the breaks in the rain and finally the sun came out briefly....so I took my chance and grabbed it.

Thanks for stopping by.

You may recall this post. It is a relatively CAS (clean and simple) layout that goes together in a jiffy. Well.....whilst (still) playing with Vintage Vogue, I decided to do some similar cards, but in a different colour combo. When I am making cards for my 'stash' (that wonderful and glorious pile of cards you can call on in a moments notice when desperate!!) I try and do 1 card landscape and 1 card portrait. This time around however, I had a lighbulb moment...and that was to pop the stamping in the upper corner, instead of the bottom left (as is usual for me). Here's the result.... 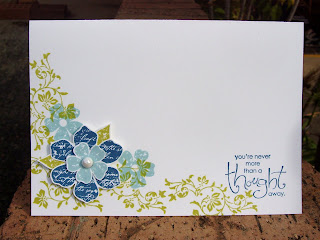 And of course, close ups of the flowers and the sentiment.

Thanks for dropping by.