Good morning all. So nice to feel the warmth of the sun is Sydney....have missed it so much.

Recently I had occasion to send a card to a friend who was coming up on the anniversary of their Dad's passing. I wanted to let them know they were being thought of.

I found this card on SCS and was quite taken with its simplicity. Although for a birthday, a change of sentiment could easily fix that.

I made 2 of the cards. 1 for the occasion and a birthday version for the stash. This is my take. 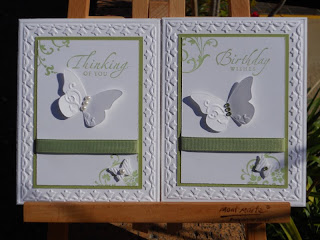 I had to make the cards slightly smaller than the 1/2 A4 sheet size due to the Tulip Embossing frame. Here they are on their own... 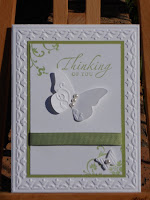 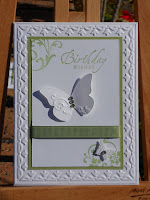 As you can probably tell from the glare, the butterflies sit up a bit. So pretty. In my never ending quest to not have 2 cards exactly the same, I used 1/2 pearls on one and light green rhinestones on the other. The change of direction of one of the butterflies also helped create a "creative opportunity" to fix an extra ink spot that appeared!!

I was so taken with the simplicity of this card...I stepped it up with another birthday present that I will be back to show you soon.
Thanks for popping by.
Stuff Used:
CS: (SU) Whisper White, Pear Pizzaz
Ink: (SU) Pear Pizzaz
Stamps: (SU) Elements of Style, Sincere Salutations
Other bits: SU Beautiful Wings Embosslit Die & Framed Tulips Embossing Folder, White 1/2 Pearls, Light Green Rhinestones, Green Grosgrain ribbon from stash, Dimensionals
Lynda xx
Posted by Lynda at 10:31 AM

Congratulations! you won a FREE Pass to the Fall Edition....contact me with your email address.
stampindjo@hotmail.com

These are stunning! but just so easy to look due to the simplicity.

These are very gorgeous Lynda. Love them! You can't go wrong with butterflies!!!
Love Jenny xx